History of The Ohio Senate

From the place Abraham Lincoln sat when he learned he was President to the beautiful works of art in our halls, discover Ohio's history around every corner. 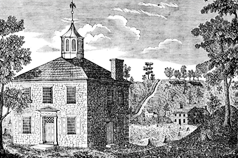 Pete Fact : Ohio was the first state to be carved out of the Northwest Territory. Before Ohio was admitted to the Union in 1803, it was part of the Northwest Territory. Congress appointed a governor and three judges to administrate the area. Not until the territory's population reached "five thousand free male inhabitants of full age" were settlers given the right to elect representatives. The territorial legislature consisted of a House of Representatives and a five-member Legislative Council -- the precursor of the Ohio Senate. In February of 1799, the United States House of Representatives chose the first members of the Legislative Council. Council members included Jacob Burnett of Hamilton, James Findlay of Cincinnati, David Vance of Vanceville, Henry Vanderburgh of Vincennes, Indiana and Robert Oliver of Marietta.

Pete Fact : Politics and personalities shaped Ohio’s entrance into the Union. Arthur St. Clair, the Governor of the Ohio Territory opposed Ohio’s statehood. St. Clair, a Federalist, wanted the territory to be divided into two states instead of one. President Thomas Jefferson, a Democrat-Republican, removed him from office in 1802. Jefferson believed St. Clair’s rule was more about self agenda than the good of the Ohio Territory. Ohio’ first Constitution affirmed Jefferson’s opinion. The first Constitution provided for a strong legislature and a weak Governor as a result of St. Clair’ method of governance. Prepared in 1802, Ohio's first constitution established three branches of government. The legislative branch of government, called the General Assembly, was composed of a House of Representatives and a Senate. Thirty representatives and fourteen senators, representing seventeen counties, took their seats as the first legislature was called to order in Chillicothe on March 1, 1803. At this time, the state legislature held virtually all the power; the governor, having no veto authority, was a figurehead. The General Assembly appointed judges and all state offices, except the governor.

The first speaker of the Senate was Nathaniel Massie. Massie was a veteran of the Revolutionary War and a surveyor by trade. He is credited with founding the city of Chillicothe, which served as the first state capital until 1810. 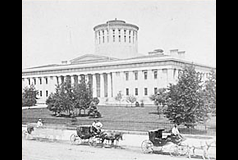 The Statehouse as it looked following the Civil War.

The Second Constitution of 1851

The Constitutional Convention of 1851 produced the Ohio Constitution still in use today. Initially, the convention was held at the first State Capitol building in Columbus from May 6 to July 9, 1850. However, the location of the meeting had to be changed due to a cholera epidemic in Columbus. The convention reconvened in Cincinnati from December 2, 1850 to March 10, 1851.

William Medill, a former state legislator, supervised the convention as the president. After 135 days of contentious debate, the convention delegates produced a new Ohio Constitution which was adopted by the popular vote of the people. Popular opinion at the time held that the legislative branch had too much power. As a result, the new Constitution added many limits to legislative authority. The Constitution contained provisions for the people to elect executive and judicial officers. Formerly these executive and judicial positions were made by legislative appointment. The new Constitution also created the office of the Lieutenant Governor who presided over the Senate. The majority leader of the Senate became the President Pro Tempore. Medill went on to become the first Lieutenant Governor who served over the Ohio Senate in 1852 and 1853. 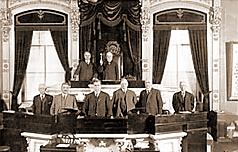 The joint convention of the General Assembly in the House Chamber during the Constitutional Convention of 1912.

Pete Fact : The last lieutenant governor to serve as the presiding officer of the Senate in 1978 was Richard Celeste, a Democrat. Celeste later served as governor from 1983 to 1991. In 1912, a fourth constitutional convention was held. Several famous politicians, including Theodore Roosevelt, William Jennings Bryan, and President William H. Taft, addressed the convention. The convention representatives agreed to refine the Governor's veto power over legislation and to give legislators the authority to pass labor laws. Delegates also decided to grant municipalities "home rule" authority – the power of a local government to self-regulate.

Fifty-five years later, voters approved a constitutional amendment establishing the General Assembly's makeup as the 99-member House and 33-member Senate we know today. Later voters approved an amendment requiring the governor and lieutenant governor to run together beginning with the 1978 election. Since this change, the Senate majority leader and presiding officer of the Senate has been the Senate President.