Committee is where you can participate in the bill-making process by sharing your opinion on legislation important to you. 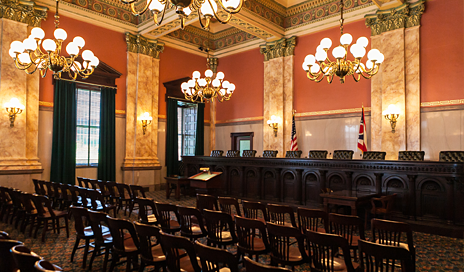 The majority of Senate committee hearings take place in the North and South Hearing Rooms located on the second floor of the Senate Building.

The formal roll call votes during Senate sessions may give the impression that every vote has been decided in advance. This is indeed the case because in-depth examination of legislation takes place in committee hearings.

Pete Fact : The Senate President determines the membership and number of Senate standing committees. Appointments for committee chairs, vice chairs, and ranking minority members are made at the beginning of each new General Assembly, but changes and substitutions can always be made at the Senate President’s discretion. Following a bill's introduction, it is assigned to one of the Senate's standing committees. During committee meetings, bills are debated and amended and members of the public are given the opportunity to contribute testimonies. Witnesses are not under oath, as in a courtroom, but they must register with the committee chairperson at the beginning of the hearing.

Pete Fact : Committees are not required to report bills for consideration by the full Senate. In fact, though hundreds of bills are introduced every session, only a fraction of them make it from committees to the Senate floor. Senators want to hear the views of Ohioans as they consider legislation. Weekly committee schedules are posted on the web, in the Senate Clerk's office, and in the hall outside the Senate Chamber.